The Bulgaria Adventures 3.0: Planning Our First Proper Holiday in Our New House 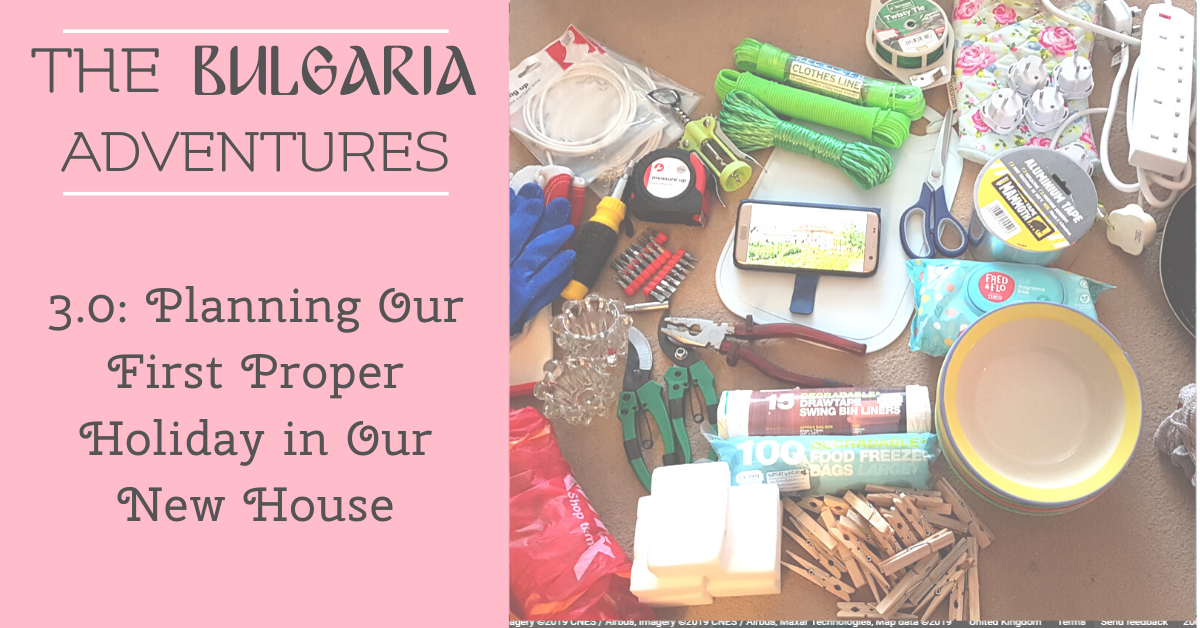 Back home again on the Isle of Wight, and we were keen to get another trip booked as soon as we could!

This time we also wanted to take the two older boys to show them the house and give them another foreign holiday too.

We hadn’t taken them last time as we’d figured it was probably going to be really boring for them with just house viewing and all the legal stuff, so I was determined to take them for our first proper visit there.

We had only been home a couple of weeks when we booked the next lot of flights for the following March.

We’ve found with our trips that the earlier you book, the cheaper the cost.

So to keep the cost down as low as possible (especially as we thought there would be 4 adult seats needed this time, as 4 of us were 12 or over), we searched for the best possible priced dates.

There was also a lot of online advice about travelling around the time of the original Brexit date of 31st March, with suggestions to avoid travelling at that time.

Because we were going with children, we didn’t want there to be any issues with being stuck in an airport on our return due to travelling out before the Brexit date, and travelling back AFTER it.

And because Ian’s work holiday year also ended on 31st March, we had to make sure he’d used up all his leave by then too.

So that dictated when we could travel this time.

The flight prices around then turned out to be shocking though!

EasyJet were offering child seats (for anybody under 16 years of age) for the price of a single adult fare on our local bus service – just £3.76!!!!

But only on specific dates, so we grabbed them whilst we could!

Then we had a 5 month wait until we could actually use them!

In the meantime, we researched on expat forums for people who might be in the area that we could meet up with, and one day saw a post from someone called C (full name removed for privacy) who had moved to a village about 20 minutes drive from our village, who was asking for people to connect with in the area.

So we contacted her and swapped email addresses so we could arrange to meet up whilst we were over there.

Planning and packing for our first trip was an interesting experience!

We were essentially holidaying in an almost empty house, although there WERE beds there, thankfully (with rather skanky old mattresses, admittedly).

We had no idea if the electricity and water were still going to be switched on, or if the respective companies had shut off the supply due to lack of use.

There’s no standing charge applied to electricity and water bills, so there shouldn’t have been any bills to pay, but not knowing the system in Bulgaria still left us with the possibility that the supplies might have been cut off.

So we had to come up with a contingency plan on the basis that we had no water. no electricity, and no heating.

And checking the average temperatures for the dates we were going in March also revealed that it was normally still pretty cold there, so keeping warm was going to be a potential challenge!

We also had nothing in the house to feed ourselves with, to cook with, to sleep in (i.e. bedding for the beds), so we needed to work out the barest essentials we’d all need to keep ourselves fed, warm and able to sleep for our first trip.

This included candles and candleholders in case we had no electricity and therefore no lighting, and Ian had another genius idea of buying a couple of strings of cheap solar LED lights that could charge up during the day, then light the house at night time.

Mobiles phones were crucial to keep charged up too, so we got a couple of cheap solar mobile chargers from eBay.

Bulgarians generally tend to use a wood-burning stove for heating and cooking, so we Googled and asked on forums and Facebook groups until we found a company that could supply us with a stove AND deliver it to us on the date we needed it, which was the first full day we were going to be there (15th March).

The stove suppliers couldn’t provide the pipes though as they were out of stock, so we had to order them from another company, with no accurate measurements as to the dimensions of the chimney hole, so we made our best guess and Ian had the genius idea of buying some aluminium foil tape that is heat resistant, in case we needed to join some pipes that didn’t fit together properly.

We also didn’t know how long the pipe needed to be as we had no measurements from the top of the stove to the chimney hole, so we ordered a length of flexible pipe that could stretch.

We ordered some bedding too, but asked for it to be delivered after 4pm on the day we were arriving as we knew we’d need it that night to sleep in.  We ordered quilts, pillows, and quilt cover sets, enough for three beds, with the plan being that B would sleep in between us as he usually did at home and the two older boys to have a bed each.

And because the mattresses were old, and probably damp from being left in an unheated house all winter, we also packed some cheap waterproof mattress protectors that I’d bought for the bed here when I was pregnant and worried about my waters breaking during the night!

Bulgarian deliveries seem to also work differently than here in that you often pay for your items cash on delivery.

So we also had to make sure that we had enough Bulgarian currency to pay the drivers when we arrived, as our village didn’t seem to have any cash machine to just withdraw the right amount of leva, the Bulgarian currency.

So we went to a local bureau de change and transferred enough sterling to cover the deliveries and then split it up into packets that we could just hand to the driver without having to count out all the cash there and then.

We figured everything would be hectic enough with deliveries arriving, things to unpack and get set up, and a toddler running around, without having to faff about finding the money stash and counting out the right amount.

We didn’t want to kit out the house with any new things unless we literally couldn’t carry them on the plane (like a stove and lots of bulky bedding!) as that would cost a fortune, so as much as possible, we sought out what we needed from Freecycle, charity shops, and bits and bobs from around the house.

We packed some old bowls from a set we didn’t use any more, bought mismatched cutlery and utensils from a charity shop at 10p per item, along with some large plastic charger plates that would be light enough to not add too much weight to our luggage but would make great temporary dinner plates.

We dug out old mugs that we didn’t use here any more, and to save precious space in the suitcases, used our clothing as packing material to protect them during the journey.

We even managed to get a tabletop electric grill through Freecycle, that would be great if we actually had electricity, to cook on.

We planned meals like Pot Noodles that could be made with water heated in a saucepan we’d brought, over a campfire in the garden, and brought some with us in case we couldn’t get anything like that from the Bulgarian shops.

So we also planned to buy all the food we’d need for the week in Sofia, and booked a night in a hotel to give us time to shop and allow us all a bit of walking around time, before the 2 hour taxi transfer.

We basically tried to plan as if we would have zero facilities available, but also brought a few things in case we DID have some power, such as a cheap Tesco Value kettle and an old electric fan heater of Ian’s

With a few cheap additional bits from eBay and Poundland (such as pegs, a chopping board, a tape measure, curtain wires etc), we managed to get everything we needed to survive our first week in Bulgaria for very little expenditure!

Our packing was some of the most bizarre I’ve ever done for a holiday! 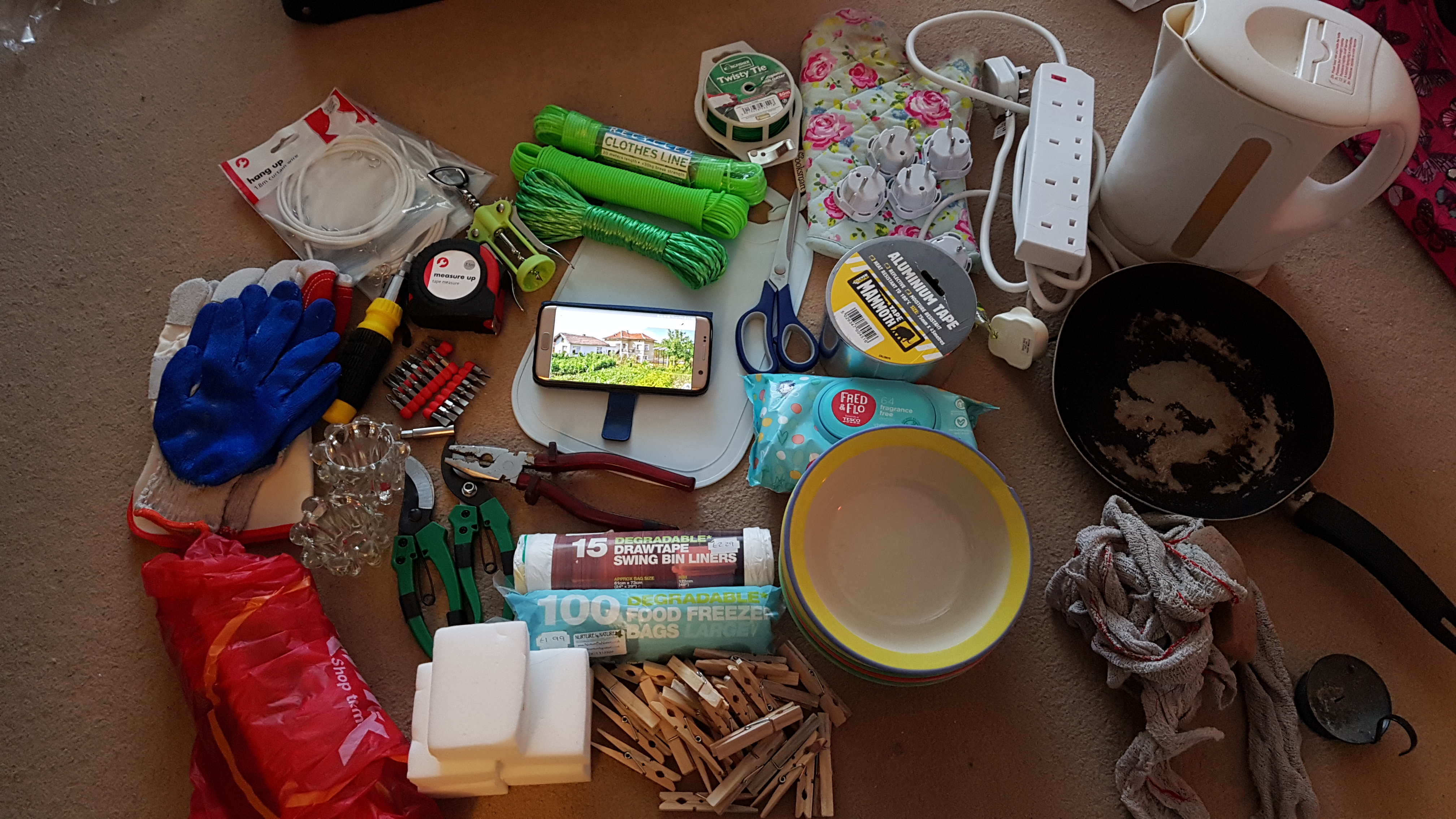 Finally, the day came and the two older boys went into school as normal in the morning and then had to leave after having their hot school lunch, catch the bus home, walk home to change out of their school uniforms, and be ready to leave with us.

We’d packed up a mountain of sandwiches and snacks for dinner that night to save money and time on dining out at a restaurant.

The plan was to eat the packed food on the train up to Gatwick and then we’d all be fed and ready to turn in for the night early, in preparation for our 3am alarm call the next morning, so we didn’t waste valuable sleeping time having dinner!

We set off with a large checked-in suitcase for the hold, four hand luggage sized small suitcases, a large camping rucksack, a smaller rucksack full of supplies for the journey to keep B happy and well, a couple of small rucksacks packed into one of the suitcases for using to carry food shopping once we were in Sofia, a toddler in a pushchair, and literally everything but the kitchen sink (our house DID have one of those already)! 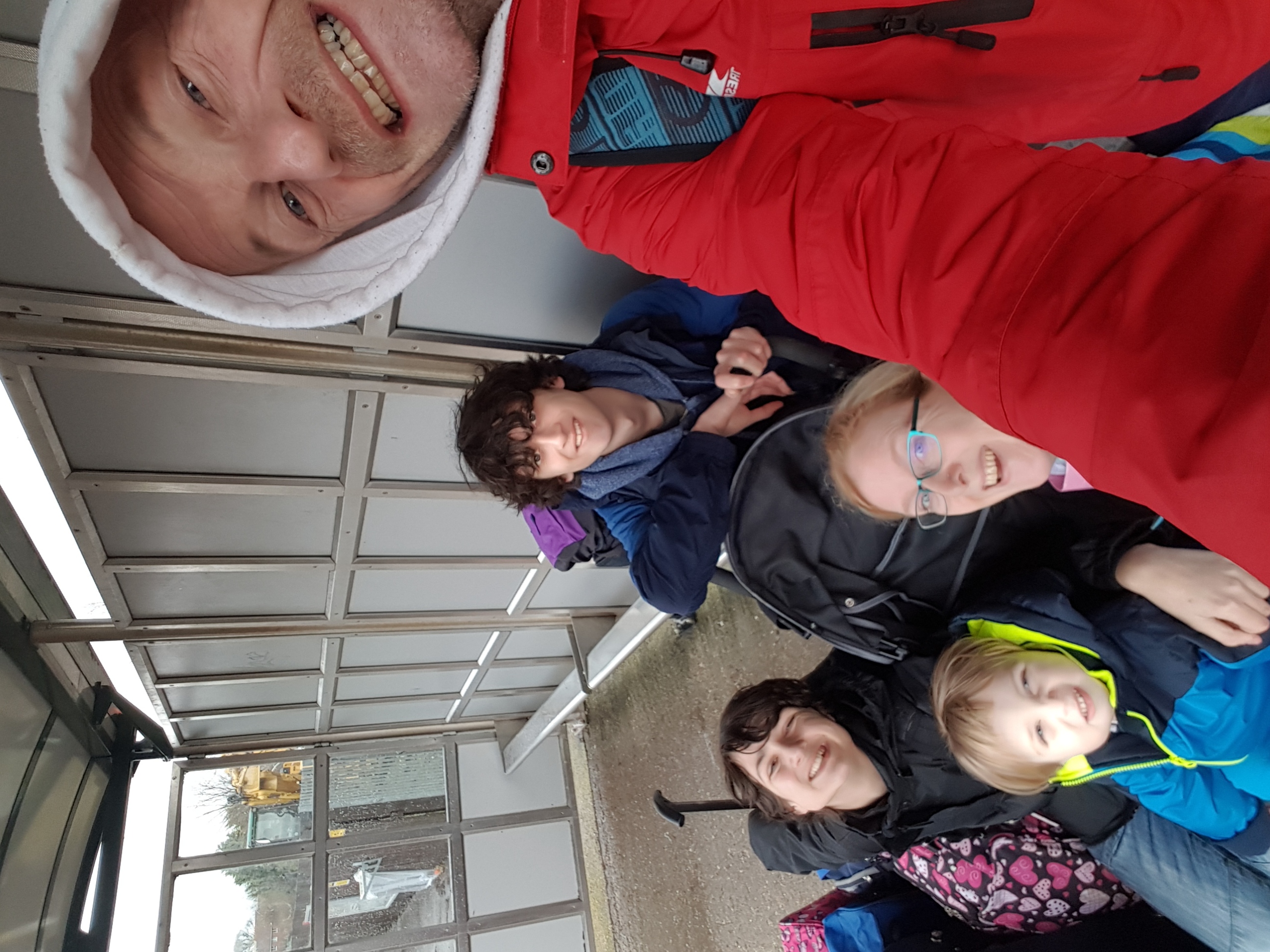