The Bulgaria Adventures 4.4: The Big Freeze(r) 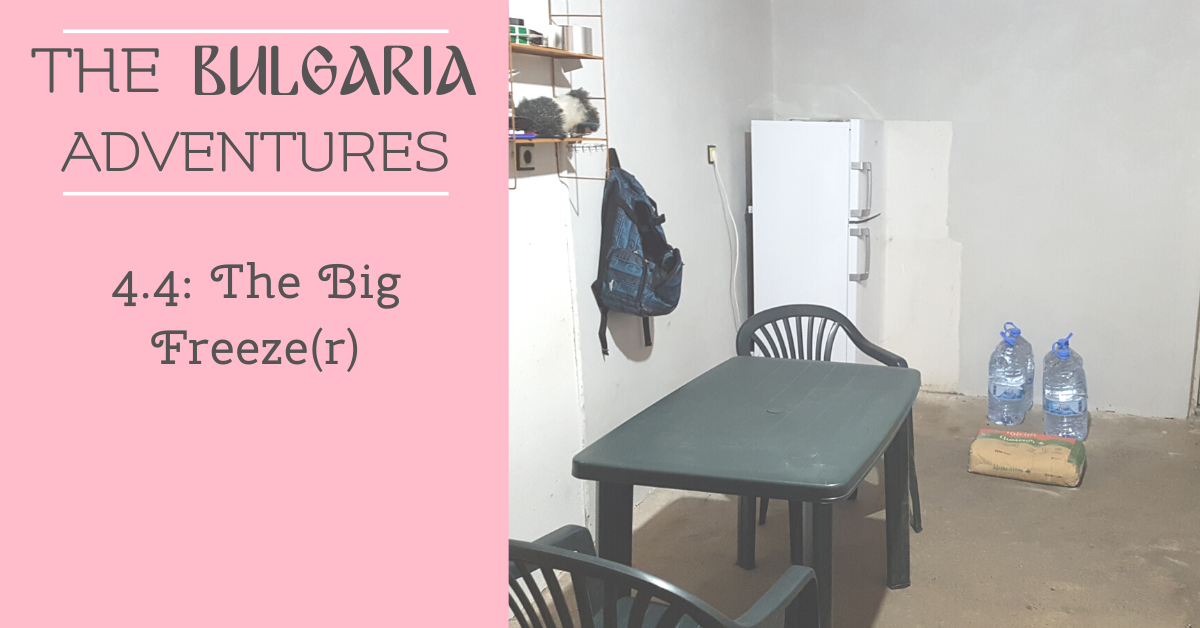 The next day B slept till 8am!

Ok, so it was 6am UK time, but looking at the time and seeing 8am felt glorious regardless, as it’s often 5 or 6 something on the clock at home!

Today, we’d planned for a couple that Ian had befriended and added on Facebook, who lived in the next village, to come and visit us; to get some cleaning done; and to prepare for the arrival of the fridge freezer from Technopolis, another big company in BG that we were hopeful would be reliable.

We also hoped to make a start putting some of the new kitchen units together.

Anyone who has ever run a marathon can probably relate to this, but when your body is struggling physically and you need to keep on pushing through, you draw on deep inner resources of strength and determination.

People with chronic pain do this too; every single day.

By today, I was definitely struggling with pain and my inner well of resources were also feeling rather depleted too, as I had been pushing myself ever since we left home.

This is when I bring in the BIG guns; adrenaline!

Anyone who has ever felt the energizing effects of adrenaline knows it powers your body to help it push way beyond its limits.

After all, if you’re being chased by a lion and start to get tired, or twist your ankle, if you let these slow you down, you’re a lion’s lunch!

It also has other side effects, like making you irritable or aggressive, to give you the ‘fight’ you need if it becomes necessary to kick the lion’s ass if it DOES catch you!

This is often why women giving birth swear at their partner!

(Just as an aside, I’ve given birth 3 times and never uttered a single swear word; it’s when I’m NOT birthing that I have a potty mouth!).

Anyway, by today I was feeling very done-in and the metaphorical lion was snapping at my heels.

But with still lots to do I had to keep going, so when that happens, I turn into a total grump bag who rants about random topics (usually involving social injustice or how rubbish so many things are these days!) and swears at inanimate objects!!

It gives me the energy I need to keep doing what needs to be done, so yeah, it’s a bizarre coping strategy but it works!

I swept the floor with the broom then swore at the dustpan as I had to hurt my very stiff, achy back to bend down and use it!

I wiped down the dresser in the pantry with a wet cloth and swore at it for being too big when I had to stretch my arm and made my shoulder and elbow joints pop and hurt to reach a bit that was further away!

Anyway, one thing that stopped my swearing (and my cleaning for a while) was something I found inside the dresser, underneath a piece of cut-up plastic tablecloth being used to line a shelf.

A small collection of photographs.

But not just ANY photos.

Black and white photos of a Bulgarian bereavement and funeral.

Including photos of the deceased man… :O

They were morbidly fascinating, as they showed an insight into life in Bulgaria during the Communist era.

I’m reluctant to violate the privacy of the people in the photos by posting them on here, but I don’t feel I am violating any privacy to describe them.

The men were all dressed the same, like they were wearing uniforms.

A lot of the women were wearing headscarves.

The photo of the deceased man shows him in his very plain coffin, with a group of people, all a similar age to him, crowded round all touching the coffin, and in one of the woman’s hand there appears to be a bank note; she looks as if she’s about to place it in the coffin with him.

They look sombre, but stoical, with an air of restrained grief.

I found myself wondering why they were where I had found them.

Why would photos that presumably are precious, from a time long past, just be hidden unceremoniously underneath a shelf liner in a kitchen dresser?

Were they from a secret past?

Sadly, I shall never know although I have wondered if I could, or even should, try to reunite them with the former owner of the house.

After my musings and showing my findings to Ian, we moved the dresser into the cottage kitchen and Ian cleared the floor and walls of cobweb and dust so we had a clean area to place the new fridge-freezer when (IF!) it finally arrived.

Then we started organising the new kitchen packages, trying to work out which ones were for which units, and made a start on putting one together.

After a bite to eat for lunch, we cleaned up ready for our next lot of visitors, and spent a lovely couple of hours with them when they arrived, talking about how we’d bought our respective houses, giving them a tour, hearing about their drive through Europe to get to their Bulgarian village etc.

B however decided that the one thing you simply MUST do when entertaining new guests is to take a handful of dusty soil and throw it at them :O

I know he didn’t mean it in a malicious way, but I fervently wished he’d chosen to test that idea out on ME in my scruffy DIY clothes rather than two lovely, well-dressed visitors!!

Thankfully, they had had children of their own and have grandchildren too, so were very gracious and understanding, but it gave ME nightmares!!

Life with a toddler is 80% like a chimp’s tea party, as you literally never can even guess what they are going to do next!

After our guests had left, we carried on with the kitchen units and managed to get one finished and started on the next one when my mobile rang and the delivery man told me in Bulgarian that he was in the ‘centrum’ (guessing he meant the town square) but as our road isn’t signposted I was concerned he wouldn’t be able to find it, so I asked Ian to go down the road to the junction and flag them down.

He headed off and left B and I at the front gate waiting for them.

One of the older men in the village who grazes his goats on the common land up the road from our house was coming up the hill and when he got alongside our neighbours house he called out to him.

He came out for a chat and when I saw him, I took B and went back inside to find the gift we had brought for him from the Island; some Isle of Wight shaped shortbread!

It was amazingly still intact, although I had no way of knowing what the biscuits were like inside!

I pointed at a car going past and said what I thought was the word for car; Ko-la and he corrected me by saying “jee-pa”, which was a distinction I had completely missed as it was a 4 wheel drive vehicle!

I pointed to the goats and he said “Ko-za”, and the goatherder tried to say something to me but I shrugged and looked clueless!

I heard him say something to our neighbour and was chuffed when I heard him say a word that I actually knew and understood; ironically “ras-beer-am”, which means “understand”!!

Clearly he was saying that I don’t understand!!

OR he was saying he doesn’t understand how the heck I can say I’m learning Bulgarian when I understand so little LOL!

B was enthralled with the goats and kept trying to stroke them, so the man tried to show him how to pet them, which was sweet 🙂

Then B wandered back up the road to our house so I had to dash off after him and called out goodbye to the neighbour and the goatherder, and was very surprised to hear our neighbour hold up the biscuits in a gesture of gratitude and say, very clearly, “Thank you”!!

And there was me assuming they didn’t know a word of English!!

For all I know, they’ve been listening to every word we’ve said and chuckling to themselves 😉

Still, it was lovely to make contact again as we’d been so caught up in getting everything sorted in the house, and all the socialising, that we’d not been round to see our neighbour.

I confess I’d actually felt horribly embarrassed that we hadn’t by that point, and I was grateful for the opportunity to greet him more casually by us both being out in the street at the same time; it felt more relaxed than knocking on his front gate when we hadn’t seen him for 6 months.

Soon after, the delivery lorry pulled up with Ian and the two delivery men inside, and our fridge freezer arrived!!

We soon got it unpacked and set up to let the coolant settle down after being transported, and were looking forward to being able to plug it in and switch it on in four hours time!

Ian fired up the stove and we cooked another simple pasta and sauce for dinner, then we got B to sleep and carried on with the kitchen unit we were making, finally finishing it at quarter to 11!

By which time, we were glad to collapse into bed and sleep, knowing that at least the next day would be a bit more relaxing as we were going to spend the day in Manastirishte with D and C, and finally seeing their home that we’d seen so many photos of over the last few months!

A bunch of grapes we harvested from one of our vines!

The pantry with the working fridge-freezer AND the high-class dining table and chairs!