The Bulgaria Adventures 4.3: Day 2 in the Big Bulgarian House! 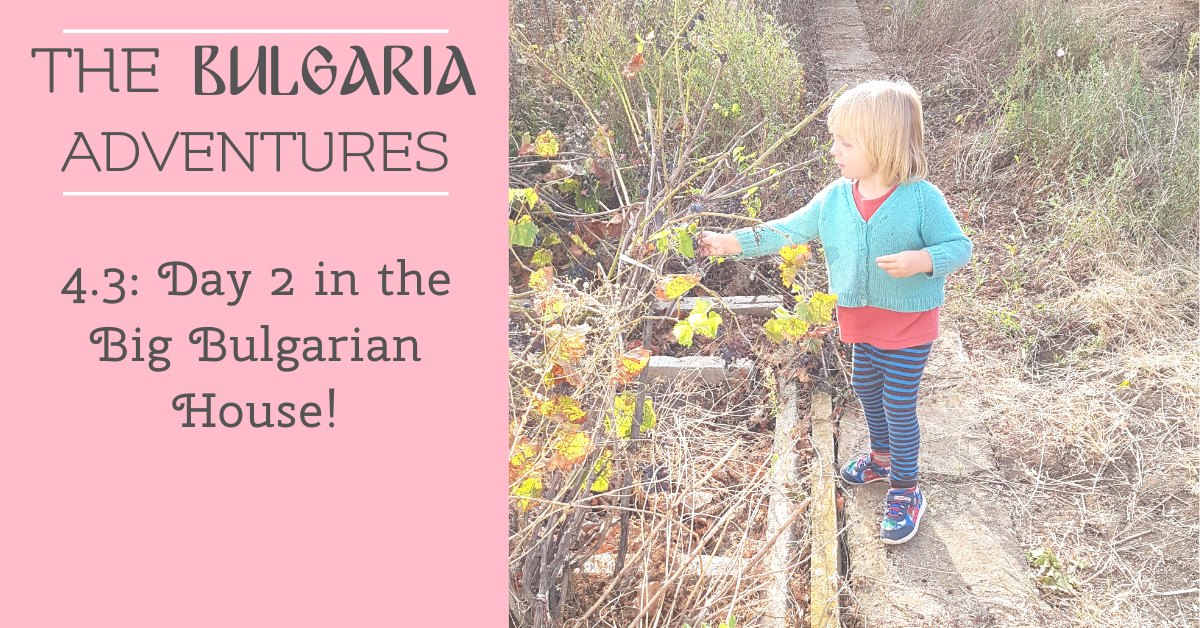 Another day of trying to get the garden cleared a little bit, AND finding out we weren’t the only Brits in the village (Little Britain reference!).

A week or so before our holiday, I’d gone onto Facebook and searched for ‘Gradeshnitsa House’ to find the Facebook ‘place’ that I’d created back in March for checking in, adding photos etc.

So it was quite exciting to discover that someone ELSE had been posting photos on Facebook of THEIR house in Gradeshnitsa!!

Wanting to make more contacts for when we were out there, I clicked on their profile and sent them a private message introducing us.

Then didn’t hear anything so I figured they either hadn’t read the message, or weren’t interested.

Which is cool; not everybody wants to make contact with complete strangers on the internet LOL!!

But then, the day before we were due to leave, we got a reply saying he would be happy to meet up with us 😀

So we arranged for him to come round later that day, as we couldn’t leave the house during ‘delivery hours’ as we were still waiting for our household supplies order from a company called Praktiker to arrive.

We pottered in the garden in the meantime, clearing a bit more of the weeds and whilst I was trying to clear the path to the outside toilet, I noticed something odd looking in among some very sticky, spikey grasses (that had been the bane of our life yesterday as the sodding things got stuck in all our clothing and then prickled our skin through the material).

It turned out to be a poor little dead baby bat, that must have landed on them whilst it was flying around in the night and then got all tangled up and stuck to them.

I picked the poor little thing up and felt so sad for it, and called Ian over to see what I’d found 🙁

Even though it was dead, I couldn’t bear to leave all those horrible grasses stuck to it, so I gently started trying to remove them.

At which point, the sweet little thing opened its mouth and squeaked :O

I promptly burst into tears that I had unwittingly caused it pain, and then cried some more because there seemed nothing I could do to help relieve its suffering 🙁

I vacillated backwards and forwards wondering what I could do to help it.

On the one hand, I wanted to try and remove the horrible grasses and give it a chance to live.

On the other, they were all tangled up in its poor little face, which had blood on it, so the likelihood that I could remove them without causing even more damage was remote and probably the kindest thing to do would be to put it out of its suffering by killing it 🙁

But I knew I couldn’t do that myself, even if it was the kindest thing for it.

So I sat down and spent the next 40 minutes or so, trying to use a pair of scissors to cut the grass heads off and maybe allow the little thing to be able to fly again, as they were all tangled up in its wings and feet too.

I was quite successful in removing the worst of it, and had just reached a point where I felt it had its best chance of being able to fly around again when it gave one last squeak and died 🙁 🙁

At which point, I cried again.

Then took out my anger and frustration at the unfairness of life by using C and D’s hedge clippers to hack down all the remaining same species of grass plants that were still growing, to prevent it happening again.

We wrapped the bat in some tissue paper and buried it beneath the fruit tree next to the outside sink.

I needed to do something positive after that, so we decided to wander around our garden perimeter and have a look at our trees to see what species they might be.

When we’d been here in March, they’d just started leafing up and blossoming so we’d found it hard to identify them, but we hoped that this time of year there would be fruit on them, so we could identify them a bit easier.

However, we forgot about the 6 foot high weeds, so it was quite hard going.

But we still managed to identify a couple of plums and a quince tree.

We were a bit disappointed we didn’t seem to have any nut trees like next door though; his walnut tree was glorious!

So we’ve buried a few walnuts that we found on a walk in our garden and with luck they might even grow!

Although if my gardening skills are anything to go by, probably not!

My great-grandfather was a very keen and talented gardener; I DIDN’T inherit that skill from him 😉

After a bit of lunch, our new friend D popped round to introduce himself 🙂

He very kindly brought us a lovely bottle of wine too!

We had a lovely time chatting and showing him around, and hearing about his life in the village, finding out things that would have taken us a LONG time with our very limited Bulgarian if we’d only been able to chat with our next door neighbour.

Whilst he was with us, the delivery van turned up with our Praktiker order – ALLELUIA!!!

Essentials like buckets, a broom, a mop and mop bucket, saw, axe, stepladder, a table and chairs at last so we could actually sit down on something other than beds or the outside stairs to eat (plastic patio ones so we could easily carry them outside for al fresco dining, plus they were a lot cheaper than a standard dining set!), and even a cheap flat-pack set of kitchen base and wall units!

After not getting our delivery of these last time we were here, it felt like Christmas to finally be able to properly CLEAN the place, and Ian now had the tools he needed to cut up all the wood for the wood-burning stove!

D kindly helped us bring in our delivery then we set up the chairs and table in the pantry and celebrated finally getting it by having another cuppa with him actually sat on the new chairs before he headed off again.

We felt very blessed to have found another lovely person here 🙂

We then got unpacking the delivery and checking off the items from the invoice, which of course was all in Bulgarian and meant it took quite a while to match up the things we’d ordered with the name of them in Bulgarian!

But it was a good exercise in the language, which I am still woefully poor at, despite doing a lesson every day since March on an app called Mondly.

Now we actually had the supplies to do it, we planned to clean and prep the pantry for the delivery of the fridge-freezer, which was scheduled to arrive the next day, after 3pm.

But I was already feeling pretty painful and knackered so we put the cleaning back to the next day (Saturday) and decided to take the rest of the day easy.

We made dinner, ate it, then took B for a short post-prandial stroll up the road to enjoy the views of the sunset across the village before bed…

B picking some of the grapes from our vine…

Plums and quince in our garden

Christmas comes early; our haul of goodies from Praktiker 🙂 Now we can actually start to get on with stuff here!