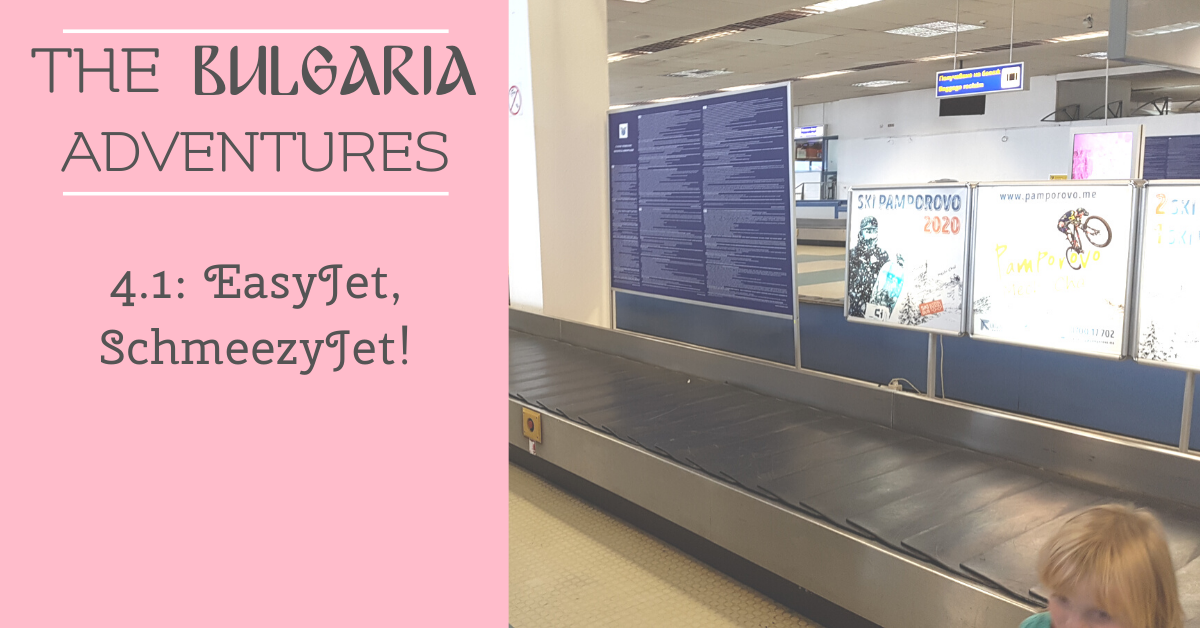 The next morning I woke up at 1:49am, full of anxiety about missing our flight!

And then proceeded to stay awake until the alarm went off at 3am, diddling myself out of another 1 hour 11 minutes of sleep!

The taxi to the airport was uneventful (about the only part of the trip so far that WAS!) and the time from arrival at Gatwick to actually boarding for our flight went quickly.

B was still in his pushchair at this point, after getting our luggage label for it at the baggage check-in, as it makes managing luggage and a toddler so much easier than handing the pushchair over straight away and then having to supervise him for the next 2 hours or so.

We pushed him in the pushchair down the passenger boarding bridge right up the plane door, then I unstrapped him and folded it down, putting it to one side so it didn’t cause an obstruction.

I spoke to a ground crew member standing right there to ask him if this was the place to leave it for it to be loaded onto the plane and he confirmed that it was.

To be honest, there was nowhere else we COULD have left it at that point, as we were literally at the plane door!

All well and good, so we got onto the plane and enjoyed a straightforward flight to Sofia.

Upon arrival, we made our way to the baggage carousel with B and all our luggage and waited for our pushchair.

And waited some more…

Until the carousel was turned off and still no pushchair! 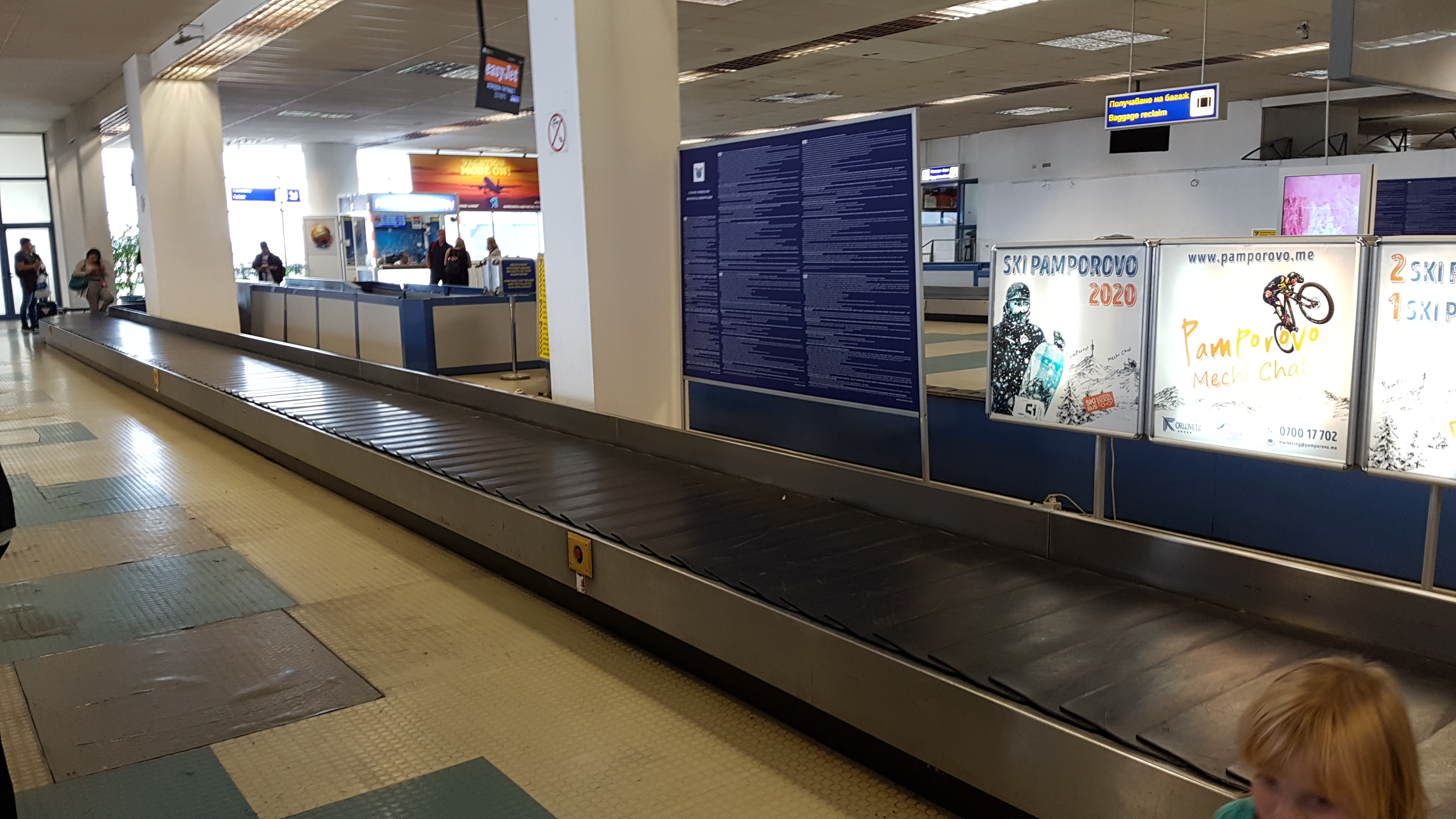 But this often happens as it’s frequently treated as oversize baggage and placed in a separate area, so we gathered up our stuff and set off to look for it.

B was already tired and grouchy from being woken up at 3:30am, so chose this moment to start having a major meltdown, screaming and crying 🙁

Ian could barely hold him in his arms as B thrashed around, and I attempted to figure out what the hell to do now, in an almost empty tiny airport arrivals room, with nothing more than a small cafe, a taxi booking booth and two car hire booths!

I used my phone to call EasyJet customer service and they told me to go to the EasyJet service desk.

Clearly, they had never been to Sofia Airport, Terminal 1!

I explained that there is nothing here; there’s just a single room with the facilities listed above, and so I was told to go online on the EasyJet website and log the loss of the pushchair on there.

I said I had limited mobile data and that might not be possible if I can’t get a decent signal anyway.

Again, I was told to go and find the EasyJet service desk!!

So AGAIN, I explained that there was nothing like that here.

There were barely any airport staff full stop!

The arrivals hall at terminal 1 has fewer facilities than the average train station in Britain.

I asked her what exactly are we supposed to do with the screaming toddler that could be clearly heard over the phone echoing around the whole arrivals hall, and no pushchair to put him in whilst we managed all our luggage and got out of the airport and into the city centre via the metro system.

I’m normally a pretty patient person, but I was feeling increasingly frustrated that this customer service person didn’t seem to get how limited our options were and just kept telling me to do things that might not be physically possible.

We don’t all have contracts with countless GB of mobile data, nor always have a decent signal where we have landed, to be able to do everything online, and companies should surely have contingencies to cope with situations like this and allow customers to get assistance over the phone instead.

We butted heads for a few more minutes before I gave up even trying to talk to her.

For an uber polite British person, hanging up without saying goodbye was out of the question, because I’d rather eat my own poo than rudely hang up the phone on someone 😀

But I did actually say goodbye in a slightly less friendly tone than usual and WITHOUT even saying “Thank you”; THAT’S how p***ed off I was by that point!!

I looked around the hall and spotted an information booth that I’d not spotted in my adrenaline-fuelled anxiety attack, so I explained to them what had happened and asked what we should do.

She pointed to a phone on the wall across the hall and said I needed to phone the number on the wall that corresponded to my airline to speak to someone from the company that handles all the baggage.

So back across the hall, all the while with B still screaming and echoing embarrassingly around the whole room, to the phone on the wall.

Again, I explained what had happened when I managed to get through, and again, I was told that nothing could be done until my claim was logged on the lost baggage section of the EasyJet website.

So I had to wander around trying to find a decent enough signal to be able to get online and then sit faff-arsing about filling in a stupid-ass multi-page form on a stupidly small mobile phone screen, with a still-thrashing-about, upset, screaming 3 year old who needed a reassuring cuddle from his Mummy echoing all around the room we were in, having to rummage around through all my bags to find the individual bits of documentation that held all the reference numbers they needed, and even trying to remember the bloody manufacturer of the pushchair.

I was NOT happy!!

In fact, I was bloody furious!

Our plan had been to pick up the pushchair, pop B in it, hang some of the luggage off the handles and get the metro from Terminal 2 into Sofia Central, get some lunch in a cafe, get our food shopping that we needed for the week from a nearby Billa supermarket, and be all ready for our transfer taxi to collect us at 3pm for the 2 hour drive to our house.

With no pushchair and no other way of easily managing B, plus all the time that had been wasted by then just trying to sort out the problem that wasn’t even of our making, we were running out of time and options.

In a brief moment of mental clarity, I suddenly had the idea of phoning the transfer taxi company and asking if they could pick us up earlier and take us to a shop to buy an emergency pushchair, and to a supermarket to enable us to get our food shopping.

The owner was wonderfully helpful and said that as there were no available drivers to pick us up early, he would come out himself and collect us, drive us to a baby supply store and wait in the car park with all our luggage so that we could get our food shopping without having to carry all our luggage around too.

This would basically be an extra two hours of service, and he said it would cost us an extra 60 leva on top of the price we were already paying for the transfer.

Given that last time we were in Sofia, we’d been charged 50 leva just for a one-way taxi from the airport into the city centre, this seemed like a sensible (and bargain!) option.

B was calming down by this point thankfully, so whilst we waited for the driver, Alexsander, to pick us up, we were able to buy a drink and begin to calm down ourselves and regroup.

After picking us up, Alexsander drove us to a mall with the shops we needed and we were able to buy everything we needed, but our holiday budget was severely eaten into from having to use 119 leva of it to buy a pushchair we didn’t want, and another 60 leva of it to pay the driver for his extra time.

Still, we were just happy that we’d managed to get what we needed and not have our entire trip disrupted.

And a massive thank you to Alexsander from SofiaAirportTransfer.com for rescuing us!!

Two hours later, we arrived at the house, only to be greeted by Sleeping Beauty’s castle….:O 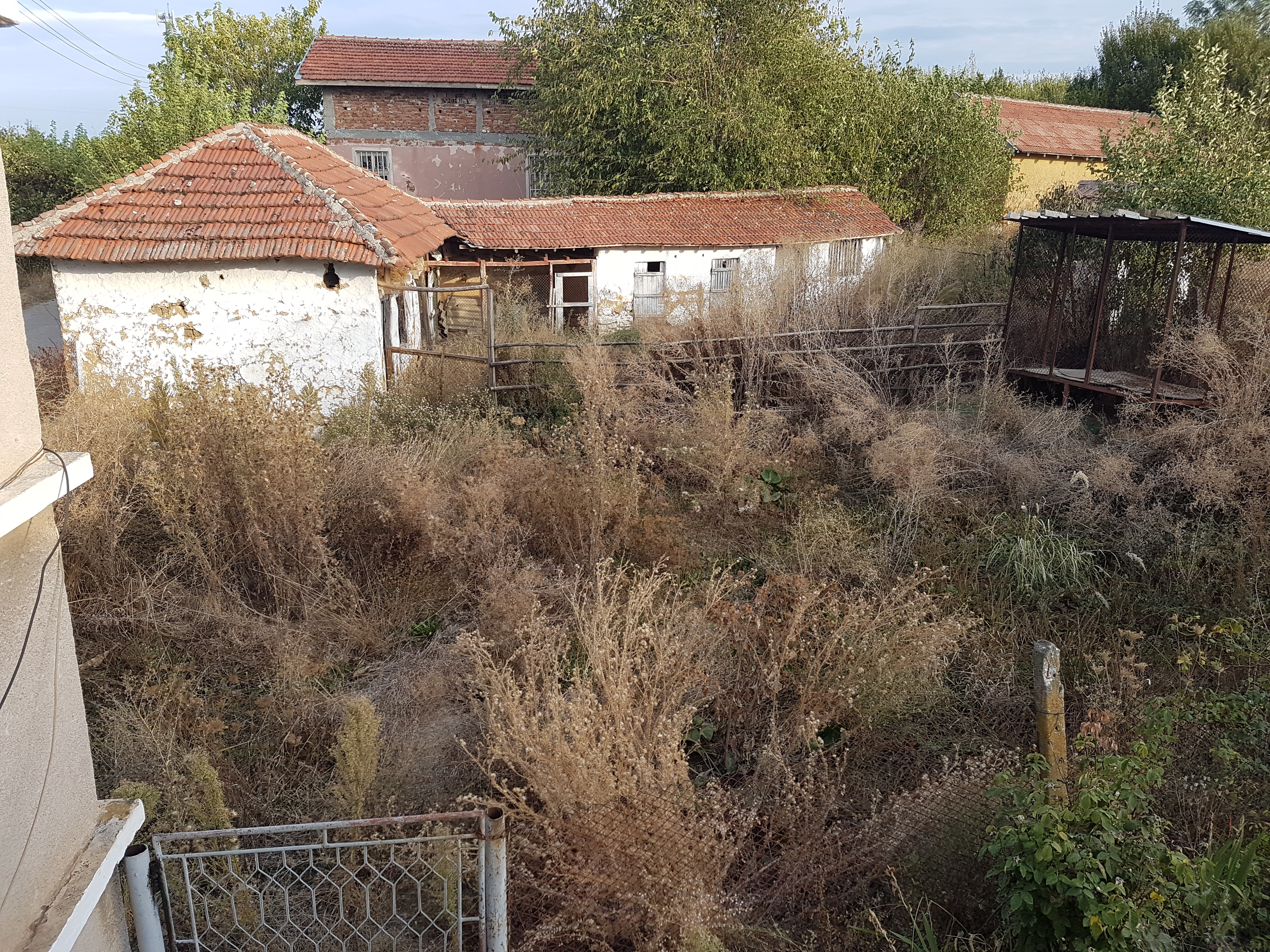 Click to read about our first 24 hours in Sleeping Beauty's Castle.....

A few more photos from the journey…