The Bulgaria Adventures 3.8: Back to Sofia… 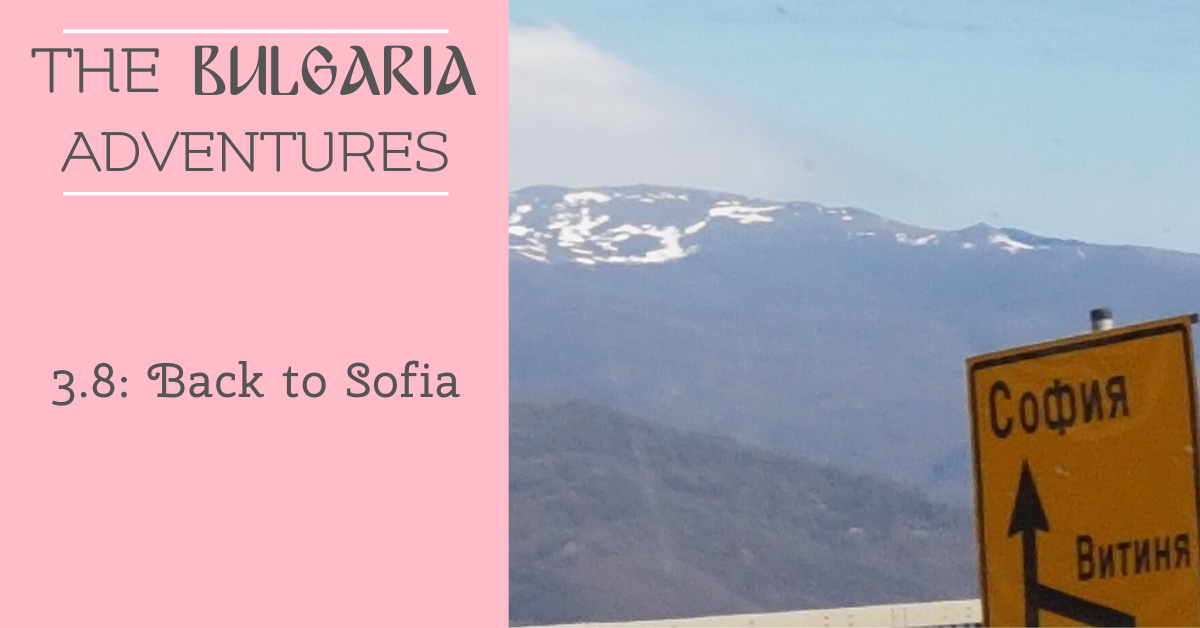 As we knew the boys would have to be sat down for two hours, for the drive from the house back to Sofia, we took one last stroll down the road to the village to give them time to stretch their legs.

We also did some more photographing and videoing of the house and garden, and finally had the depressing task of putting the house to bed for a few months, and then deciding which things to bring home so we could pack up to leave.

The bedding was all stripped off and carefully packed away in the wardrobe containing mothballs to protect them.

The water was shut off and the taps opened to drain any possible water from them.

The electricity fuse was unscrewed from the main supply box.

Just about an hour before we were due to leave, a van turned up outside.

It was only the delivery van finally bringing us the flexible chimney pipe order!

After lunch, the taxi turned up and we packed all our return belongings and headed back to Sofia.

B fell asleep in the taxi, bless him.

We had a bit of hassle finding the hostel/guest house we were booked into, and when we DID find it, the building it was in seemed to house multiple businesses.

We had to drag all our stuff up several flights of steep stairs and when we got to the floor it was on, the entrance was all locked and nobody was around!

So we wondered if we’d maybe missed something downstairs and as the landing was very narrow and we didn’t want to block access to anyone else trying to get up or down the stairs.

And dragged ourselves and all our stuff back down to the entrance hall again!

We looked all around, trying to find some clue as to what we were supposed to do and, as we had nowhere else to stay, just decided to hang around there for a bit in case someone came in and we could ask them.

After a short while, someone DID turn up and they turned out to be the very person who was there to check us in!

So back up the narrow spiral staircase with all our luggage and a pushchair we went!

The “Reception” was so tiny that there was only enough room for the two adults, so the 3 children had to wait out on the landing!

The booked price we’d found was cheap, but then they charged us a compulsory extra fee for towels AND heating/air conditioning (despite the fact that we had no need of either, as we had our own towels and didn’t use the heating/air con!).

So we won’t be staying there again!

I don’t mind paying a fair price for a service, but to be charged compulsory extra fees for something I wasn’t going to need seemed manipulative.

We dropped our stuff in the room then had a short mooch around Sofia before deciding on Happy Grill for dinner again!

Then we sought out a place where the boys could choose some souvenir gifts for their Dad and Granny.

They went into a small tobacconist and chose a couple of boxes of Bulgarian chocolates and biscuits to give, coping really well with the transaction all by themselves whilst we waited outside ready to assist if they needed it.

I’m pretty sure I wouldn’t have been so confident at 15 and 12 years old to walk into a shop in a foreign country where I spoke not a word of the language, and choose and purchase items with a currency I was unfamiliar with too!

We noticed lots of planes flying right overhead too, so I just managed to capture a bit of video of one (but as there was some bickering going on in the background whilst I filmed it, I had to put a soundtrack over it instead!).

The trams were going past us regularly and we got some more video of those too.

B was really into a YouTube character known as Blippi at the time, and how two favourite colours are blue and orange, so when he saw the blue and orange trams, he was delighted!

They became known as the Blippi trams!

I think everyone else had a reasonable night, but I slept terribly again: A) because I was sharing a narrow single bed with B and he was incredibly restless and fidgety, B) because the trams were quite noisy and the windows were NOT sound-proofed, and C) because I never sleep well the night before a flight because… adrenaline!

Snapped from the taxi window on the way back to Sofia.

Our bedroom at the hostel in Sofia

Our bedroom at the hostel in Sofia

Ahh, a decent meal again, after a week of eating my cooking 😀