The Bulgaria Adventures 3.3: Our First Full Day in the House 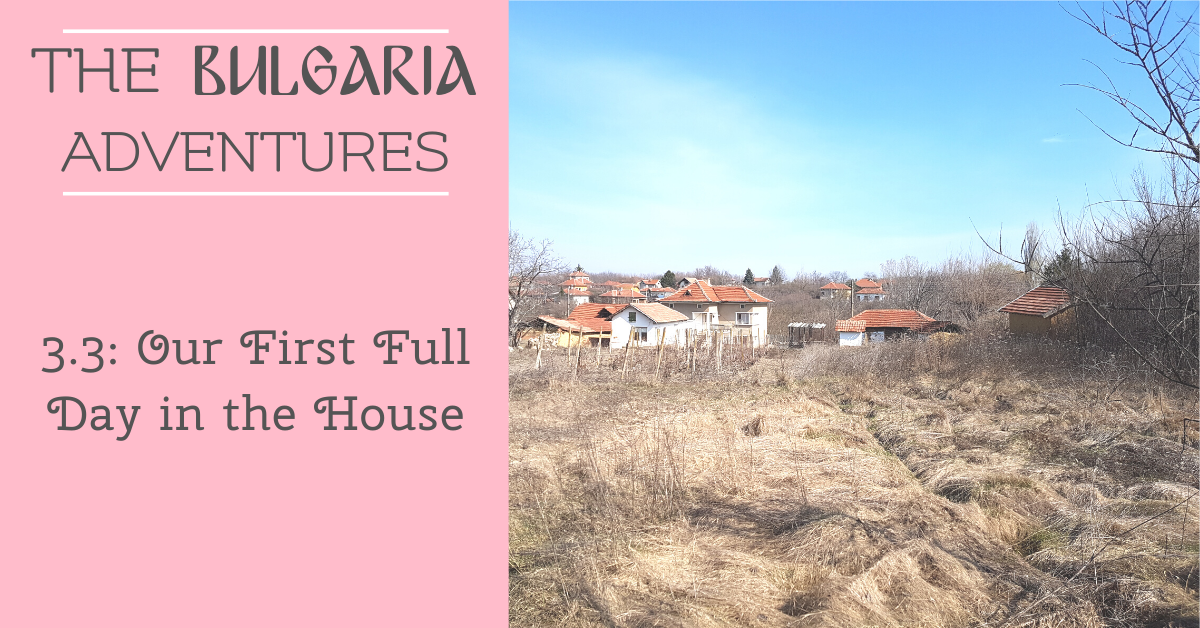 After a pretty cold night, when we woke the next morning there was frost on the ground outside!

Ian. B and I got up and dressed, grabbed a coffee to warm us up, plus a bowl of cereal and milk, and left the big boys in bed whilst we went for a stroll up the road to explore a little bit, as we’d not had time during our previous visit.

We also had a stroll round the perimeter of our garden to see if we could work out what kind of trees we had.

But it was barely spring so the trees had few identifying features to work out if they were fruit or nut bearing.

At about noon, a van pulled up outside and we were thrilled to receive the first of our deliveries!

Our new bedding had arrived!

OK, it was a few hours later than planned, but thanks to C and D, we hadn’t frozen the previous night, and now we had our first brand new items for our new house!

I probably need to get out more, but this was really exciting!!

We unpacked the boxes and cleared the beds of the borrowed bedding, making them up again with the new items.

They looked nice for about 20 nanoseconds, before the boys all sprawled across them, using them as chaise longues and creasing them all so they looked like they’d been screwed up and stuffed down the back of a sofa for 6 years!!

Sometime in the morning, I received a phone call to say that the stove delivery was on its way and to expect it by 6pm that evening.

I also received an email from the company who were supposed to have been delivering the flexible pipe we’d ordered that there was a technical issue; the courier they had tried to use to send it to us were refusing to deliver unless we provided a Bulgarian mobile phone number!

Which of course we didn’t have!

They were very apologetic, but it still meant that the stove which we’d ordered to keep us warm and to cook on for our visit was now not going to be usable, as you can’t burn a woodburning stove indoors without stove pipes to take all the smoke up the chimney!

We didn’t fancy all being smoked and carbon monoxide poisoned, strangely enough!

We discussed a few ideas, including setting it up outside (but what if it rained?), and setting it up in front of the open window and somehow directing or fanning the smoke out there rather than into the room?

But none of the ideas were feasible, for various reasons.

I then came up with the idea of stealing the pipe from the downstairs shower, seeing as it was highly unlikely we were going to be using that whilst we were there this time, so we went to have a look and found a somewhat rusty but still salvageable length of pipe with a 90 degree bend on it too.

So we left it for now and sorted our next meal out instead!

For lunch, we grilled some sausages and heated up a tin of beans on the electric grill again.

Served with more bread, it made a perfectly serviceable hot meal, and using the gold plastic charger plates added a touch of glamour to the very rustic/basic dish!

The sun was shining and had warmed the day up considerably by this time too, so rather than sitting indoors on the floor, we decided to make the most of the now glorious weather and sit on the stairs outside, leading up to the main house.

After clearing up, we decided the most sensible use of our time would be to prepare the room that the woodburning stove would be in, ready for its arrival.

We shunted the bed that was in there away from the wall, and looked around in the garden for something to stand it on, as the guidelines suggest a stove shouldn’t be stood directly on carpet.

The best we could find for now were two concrete fence posts, so we drafted Alex in to help us lift them in from the area in front of the old animal sheds and barn.

Lots of faffing about later and we got them laid down and approximately the right distance apart from the wall, to give the recommended clearance, and from each other, for the legs of the stove to stand on.

Whilst we were waiting, we also decided to formally introduce ourselves to the neighbours.

I’d pre-typed a letter in both Bulgarian and English, giving our names and where we were from.

We’d also brought some boxes of Isle of Wight fudge, so we took one with us.

The five of us walked round to our immediate neighbour and assuming it was like England, looked around for a way through the front gate so we could walk up to the property front door and ring the doorbell.

The gate was locked, and there appeared to be no doorbell either.

We awkwardly stood there for a few minutes trying to decide what to do, then in typical British apologetic style, knocked very quietly on the garden gate, so as not to disturb them!

Of course, he didn’t hear it!!

So we knocked again, harder, and this time he appeared.

We smiled at him, said “Dober Den”  and proffered the letter and fudge, then gestured to each of us saying our names, and he said his.

It was all quite hurried and to my chagrin, I didn’t take in his name so now I will forever be mortally embarrassed that I don’t know it!

We didn’t stay long but despite not knowing each other’s languages, it felt a warm and friendly exchange, and I was relieved it seemed to have gone well, so we headed back to our house full of the warm fuzzies that we’d made a reasonably good impression!

At about 4pm, we heard a van horn toot, and the stove delivery was here!

There was only one delivery person though, and from what we could ascertain, Bulgarian delivery drivers only expect to drop items off at the kerbside, not to carry them onto your property.

Ian and the delivery driver actually carried it in together though, right through to the newly designated kitchen of the cottage.

It weighed a LOT, so it was lucky I wasn’t receiving the stove alone as I’d have been a bit stuck!

Ian took a short video of us unpacking it, but it was too late to set it up and use that night, so as it was warmer than yesterday, he made a little bonfire in the garden so we could heat up the second of C’s tubs of soup.

Yet more bread and butter from Billa and then after clearing up, we got B to sleep then lay in the dark for a little, talking quietly before all turning in ourselves.

It had been an interesting first day!

First encounter with the geese, just over the road from our house.
Firebugs in our garden
Gourmet lunch!
Lunch in the sunshine!
Gradeshnitsa Town Hall
The bedding arrives!
Pillows!
Ian heating up C’s soup for dinner
Alex & B on the path to the outside toilet!
Click to Read About Our Very Busy Day