You’re NOT Doing it Wrong; Modern Parenting Really IS This Complicated! 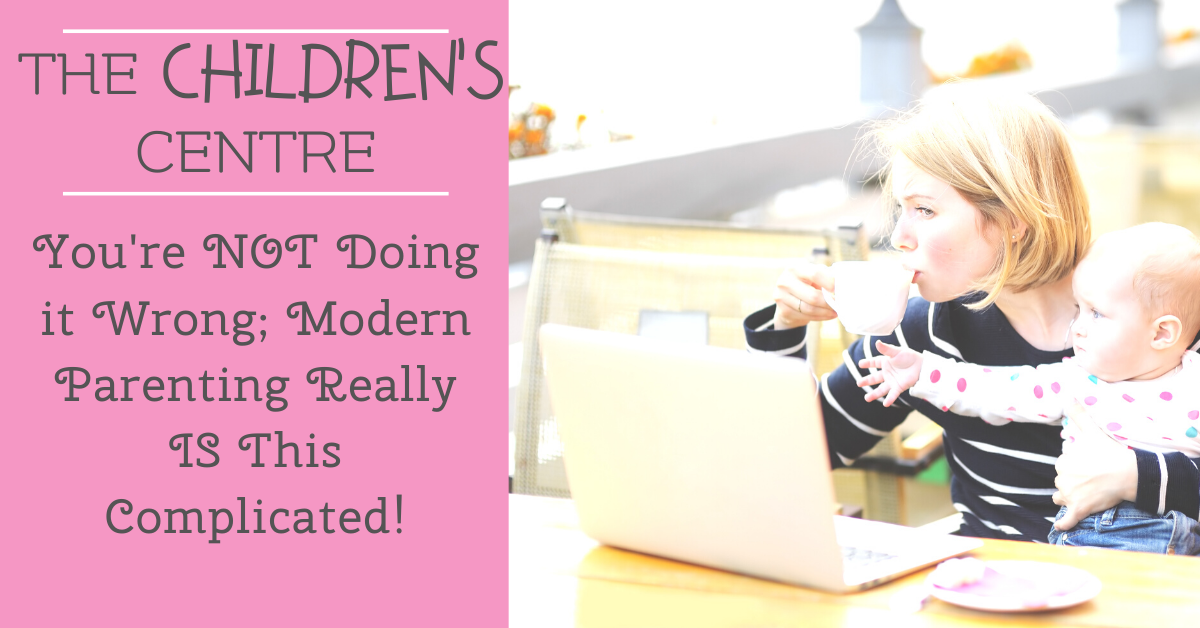 If you’re ever feeling mentally overwhelmed, this might be why.

You’re not doing it all wrong;

So if you drop a few of the 6,000 balls you’re juggling today and one of them happens to be your child’s classmate’s birthday present for their party tomorrow for example, just think “F*** it” and pop a couple of quid in a corner shop birthday card!

This constant pressure to be the perfect parent and always do the perfect thing is horse poo!!

And nothing short of modern day slavery!

Little Tommy’s head is NOT going to explode if he doesn’t get the latest toy perfectly gift-wrapped, from your kid!

He won’t be in counselling for the rest of his life because one of his classmates gave him some money in his birthday card one year!

He probably doesn’t even give a shit because he’s FIVE!

And if he DOES, then his parents need a bloody good talking to because they’re bringing their child up to become ungrateful and entitled, and Lord knows we don’t need any more of THOSE kinds of people in the world these days…!

And if little Tommy does kick up a stink that your kid didn’t get him a £17.99 Paw Patrol toy for his birthday, then your child is probably better off growing up without that kind of child as his friend anyway.

Because that kind of attitude of ingratitude and entitlement will be a horrible influence on your child as he grows up and sees how Little Tommy treats his other friends when they don’t play the way HE wants, how he treats his parents like dirt at home when you let your child go round to play, how he treats the teenage girls in his class that don’t want to date him or that do date him but don’t want to go all the way with him.

Honestly, do you WANT your child growing up with a Little Tommy type child as a role model to look up to??

Nope, so just do yourself (and your child!) a favour and chuck a bit of cash into a card 😁

And if little Tommy doesn’t thank you/them for it and stops being friends with your child, just hug them and tell them they dodged a massive bullet…😉

And we need to do that by taking a step back and becoming more aware that all the complicated BS that now makes up 80% of modern day parenthood isn’t really making US happy or our children.

It’s setting them up for more of the same crap in their own lives.

It’s teaching them that running yourself absolutely ragged to bake some f***ing cupcakes for the school fair is ‘important’ in life.

In the grand scheme of life, when your child has left that school, you’ll be lucky if anyone there even remembers your face, never mind the fact that you spent 3+ hours hand baking a batch of cupcakes and decorating them with perfectly cut out little snowmen and christmas trees for the school Christmas fair because you THINK sending your kid in with anything less than perfection will ruin either his life or yours, or both.

It’s time to take a deep breath and get some perspective….

The only reason the school asked for the cupcakes in the first place is for fundraising.

If you can’t afford to give the school the £4 they will probably make from selling all your beautiful cupcakes (that took you 3 hours to make, and which on minimum wage would have cost £24 to pay someone to make) at 20p each (and which you’ll probably buy back yourself a good proportion of anyway as you feel duty bound to support the school even more than you already have!), then offer to support them another way that doesn’t add to your burden and daily load.

Support them by going to the fair for a few minutes and chucking an extra couple of quid into the raffle ticket pot when you buy some, and thank your lucky stars that you didn’t have to spend 3 hours baking!

If it gives you genuine JOY to make some cupcakes, then do it!!

If it gives you genuine JOY to spend hours trawling the shops to find Little Tommy his £17.99 Paw Patrol toy, perfectly wrapped in Paw Patrol paper from the Clinton’s shop (except you forgot that Clinton’s closed down last year so now you need to ask on your local Facebook parenting group where you can find Paw Patrol wrapping paper these days, and then drive out of town to a trading estate store just to buy it), then do it!

I’m not saying we shouldn’t help with events.

I’m not saying we shouldn’t strive to be part of a community, and support it.

I’m not saying we shouldn’t ever try to make a kid smile with a great gift.

But when already overwhelmed people are given even MORE tasks to do, and society pressures and guilts them into doing them regardless of the personal cost, we’re going to see more nervous breakdowns, more mental health issues, more burned out parents, and the next generation are going to be learning all this from us and thinking that this is what *I* MUST do too, just to be considered ‘enough’ in society’s eyes…

And I think it’s time for that shit to just STOP!