My Thoughts on Obesity, the Sugar Tax, and the UK Recommended Food Guidelines 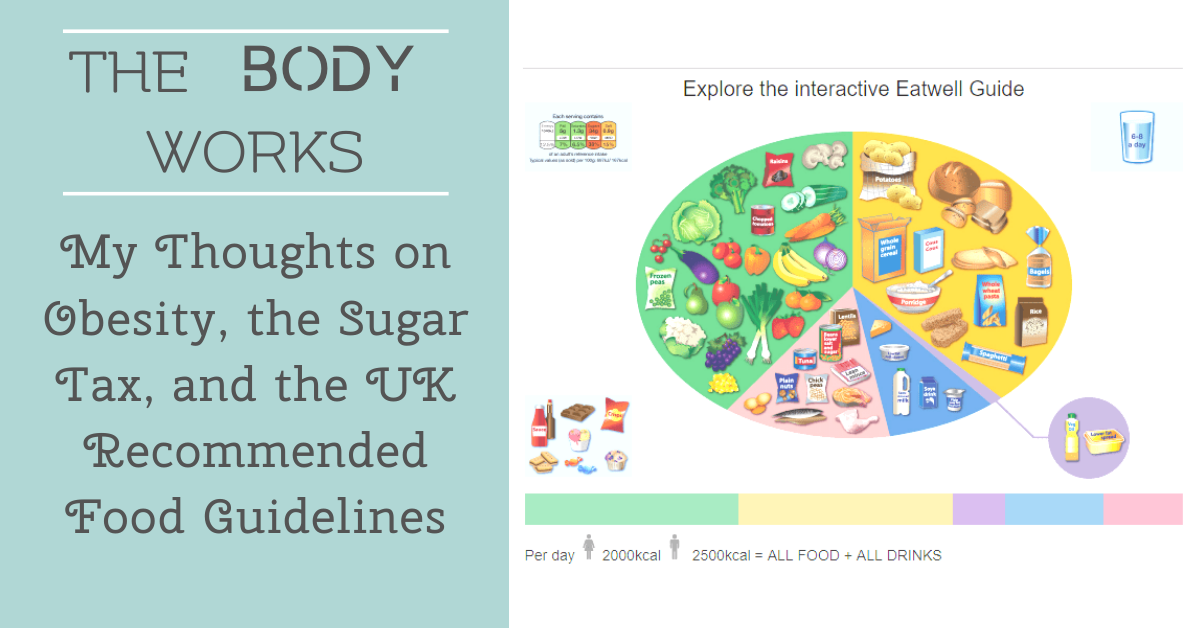 I’ve been doing a lot of research and studying of nutrition (and have even trained as a nutritional therapist) when my own health started to decline. I have avoided artificial sweeteners for YEARS as I’ve always hated the taste, so I couldn’t blame them for my health declining.

What I’ve found is that as I increased my consumption of nutritionally dense foods and cut out the ‘stomach-filler’ types of foods such as bread, rice, pasta whilst eating more fat and protein in my meals and cutting out most processed foods, I’ve found my health to be improving and my weight to naturally be reducing without needing to eat ANYTHING ‘diet’.

I’m eating LESS in terms of quantity of food and never feeling hungry and, with all my reading and studying plus my own experience, I’ve begun to wonder if the reason for the obesity crisis is actually partly caused by the Governments own eating guidelines in the form of the food pyramid, now remodelled into the Eatwell Guide?

They recommend a lot less fat, and bread, rice, pasta etc are all recommended to be the MOST food consumed in a day (excluding fruit and vegetables). When I was following those guidelines I was piling weight on and always hungry! Which led me to also wonder if hunger isn’t actually about the AMOUNT of food being eaten but about signalling a need to get the right nutrients into the body.

So as an example, if someone needs x amount of a certain micronutrient each day to function properly, the body will create hunger to drive that person to eat until that nutrient need is fulfilled. But if they are following the Government guidelines on eating, they might think they are eating ‘healthily’ by having toast with low fat spread for breakfast, a pasta-based meal with protein and salad for lunch, and a rice-based meal with protein and vegetables for dinner. But bread, pasta and rice quite likely don’t have any of that essential X micronutrient they need.  So whilst the stomach is being filled up with those, the body still NEEDS the micronutrient that it is asking for so it still creates that sense of hunger, but a bit more desperately each time.

So even though that person has eaten enough calories for that day, they haven’t met their nutritional needs so they STILL feel hungry too, to give them further motivation to carry on seeking out food to get that nutritional need met. They can’t understand how they can still feel hungry just after eating though, so may start to feel negative emotions about themselves; “I’m greedy. I’m a pig. etc etc”  But they still have that unmet need too, so despite their negative self-talk, they start to snack between meals, still consuming things that might not have the nutrient that the body is asking for.

They start to eat MORE snacks to try and quell the desperate hunger that their body now feels, often still consuming high calorie foods like bread, pasta, rice.  Plus their energy levels are now starting to suffer due to the lack of an essential micronutrient that might help them convert food into ATP for their cells, for example.  So they then find themselves drawn to sugary foods like cakes, muffins, etc, because the sugar gives them a much-needed energy boost to help them get through the day, especially when they’re out and about and are starting to feel depleted of energy.  By that stage an apple often doesn’t make them feel satiated if they’re already in this cycle and healthier foods like vegetables are harder to consume whilst on the go because they usually need some kind of preparation to turn them into something to eat.

They can’t quite believe that the scales are going UP whilst they’re generally eating a ‘government mandated’ healthy diet but they now also feel guilty and ashamed of the ‘naughty’ things they have been sneaking into their diet too, wonder why they feel hungry all the time, and blame themselves for putting weight on because they clearly must have ‘no willpower’ or are lazy or unmotivated etc. And so it goes on, with the scales creeping up each week but the person not really consciously paying attention as they’re still trying to fulfil that nutrient need of their body but with the wrong guidelines.

They have been told to stay away from fat because it’s dangerous to their health, and so they start dieting, buying low-fat, sugar-free, and reducing the amount they are eating.  They may even find that the scales reduce a little bit and they feel happy and proud of their willpower.  But the HUNGER is still there, but often worse now because they are eating even LESS.  The need for the missing nutrient is STILL there, but now they might not even be eating enough calories to fuel their daily activities either.  They may be losing weight, but they still feel fatigued and it’s getting worse despite eating ‘more healthily’, not quite right, unwell etc.

Life is busy and one day they forget to plan their diet meals because they are always busy with children, work, managing a household, and a million other tasks that often means their own needs fall to the bottom of their priority list.  They still need to eat something so they grab a chocolate bar from a garage whilst filling up with petrol after work, between the school run and getting their child to a Drs appointment.  That week, the scales go UP and they mentally beat themselves up that they are useless, can’t even stick to a diet properly, have no willpower, will always be fat etc.  And because they are mentally beating themselves up then, they start thinking ‘screw it, if I’m going to put weight on anyway no matter what I eat, I might as well start giving in to some of my cravings and eat food I like’.

But because that nutrient need STILL isn’t being met, they are still always hungry and always eating a LOT, and even worse is that now they’re starting to develop health problems too, which then means they have less energy to even be able to cook properly or exercise. So they start having to buy more and more processed, convenience foods which are easier to prepare and cook, are inherently full of crap and still won’t meet their nutritional needs.

Eventually they become chronically ill, the person ends up giving up work and going onto disability benefits because they are now so unwell, and they are now also obese BECAUSE they have been continuing to eat the high-calorie carbohydrate-laden foods advised by the Government, and all quite likely due to something as simple as not meeting their body’s nutritional needs.  The chronic illness ISN’T caused by the obesity; the two things are BOTH caused by following the wrong nutritional guidelines.  And often, medications that are prescribed to deal with the chronic illness caused by nutritional deficiencies, cause obesity themselves.  The obesity epidemic is a LOT more complex than just “eat less, exercise more”, and shaming people for being overweight when they are doing their best to meet their body’s needs with incorrect nutritional information is completely unhelpful.

This information isn’t taught in schools and even Drs aren’t taught about nutrition in medical school; for instance, I have suffered horrendous migraines for decades, since I was 16.  They have been debilitating and I have wasted a large percentage of my life lying in bed as the ONLY way to cope with the horrendous pain of them, as often as several days per week at their peak.  Whenever I go to the Dr about them, there has always been a painkiller prescription offered but NO actual advice on what to look into to prevent them happening BEFORE I even need to take a painkiller.  I’m now almost 48 and it’s only in the last few months that I have discovered how helpful magnesium supplements are in preventing my migraines, and if I DO get a hormone-triggered one, they are a lot less intense in that I don’t always have to go to bed!

32 YEARS of my life wasted feeling horrendous pain and yet a simple supplement available fairly cheaply has reduced the frequency and intensity so much that now I’m actually surprised when I get a migraine and I have a big chunk of my life back again!  So the only way a chronically unwell person might find out that it is nutritional deficiencies that are causing at least some of their health issues is if they start to Google about health problems and natural health remedies, nutrition etc.  And without being rude, a lot of people just don’t even make the connection between the importance of GOOD nutrition and their health in order to know they need to start looking at that for answers in the first place.  They just keep trotting back to their Dr to be prescribed more and more drugs to help them cope with the symptoms of their condition without working from the possible source of the health problem and treating THAT.

I believe the Government are focusing on sugar as the culprit because it’s an easy target and because they can’t admit that it’s actually the high-carb, grain-based ‘filler’ foods they have been recommending people eat that could be causing a lot of problems (as they are higher calorie but nutritionally low foods), because then they are laying themselves open to being sued for issuing incorrect guidelines that have detrimentally affected millions of people’s lives.